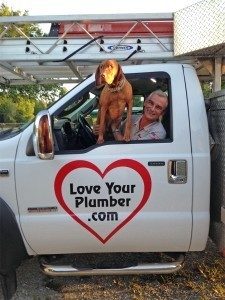 My toilet stopped flushing, is what a customer called in about last week, here in Sarasota.  I asked my secretary exactly what our customer meant, and Lori said that’s exactly what she said.  On the way to the call, I was contemplating all the things that would make the water closet stop flushing.  Was it stopped up?  Was it not filling with water?  Was the tank lever broken?  Was the flapper not connected to the the tank lever?

I replaced the flapper and checked the rest of her water closets and wear on the flappers.  The customer decided to replace all the flappers at the same time, which is a wise decision.  They were all the same age.

When replacing a flapper, one needs to be sure they are putting in the correct flapper for their water closet.  There are many different types of flappers for all the different water closets that are produced today.

A good repair plumber will carry at least four identical flappers for at least eight different water closets.  Wimpy’s Plumbing & Air does, on all of their heavily stocked, professional plumbing trucks.  This is so we can serve you quicker and more efficiently.

One thing you as a homeowner could do to prevent the rubber parts in your plumbing system from going bad, is to have a water system that removes the chlorine from your water, as it enters the house.

One other thing to consider in a water system, is that it conditions the water and removes all of the chlorine.  Imagine drinking from any faucet in the house and it being better than bottled water, with no maintenance!   We recommend and install a lot of Halo 5 water conditioners.  By having a Halo 5 installed on your main line coming into the house, you would be protecting your pipes, faucets, valves, water heater  and washing machine from the calcium and magnesium that create hard water.

Call today 941-322-1911 or schedule an appointment on line, to have your water tested or to fix that toilet that stopped flushing.  www.loveyourplumber.com.

Our Customers Love Us

Home Service Pros You Can Trust

When you need a company that specializes in professional plumbing and HVAC services, reach out to Wimpy's. Our staff is here to help you stay comfortable and stress-free at your property. Reach out now to speak with our experts!